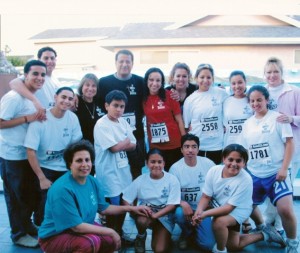 Raef Guirges is officially a 50 States Marathon Club member! He’s ran through all 50 states, and he’s also ran in the District Of Columbia. Even though he’s a member, he’s not at all done with running marathons. Raef is now a 100 Marathon Club member, and will be running another 50 marathons!

Beloved, let us love one another, for love is of God; and everyone who loves is born of God and knows God. 8He who does not love does not know God, for God is love.

“If God brings you to it, He will bring you through it.”

This is love: not that we loved God, but that he loved us and sent his Son as an atoning sacrifice for our sins.

God is Love (online) inspires Adult and youth from different ethnic, religious and cultural backgrounds to partner together and spread the message that God’s Love is bigger than our differences. We teach physical and spiritual wellness by training diverse Adult and youth participants to run a 5k,10k,half marathon and full 26.2 miles marathon together while learning how to become interfaith leaders for the 21st century.also one of the purpose of this club is to glorify and spread the word of God through physical fitness, raising money for charity groups, supporting families in the World

While our founder is a Christian, we have no specific religious affiliation and we honor any authentic spiritual path that promotes compassion and love and respects diversity. People of all faiths and ethnic backgrounds are welcome and encouraged to join!

God is Love (online) was founded by Raef Guirges, a Christian-Egyptian immigrant who fled to the United States in 1981. He escaped religious intolerance and economic poverty and went on to build a highly successful career as a Certified Public Accountant in the United States. But during his adult life, Raef also picked up a deadly habit and was a heavily addicted smoker for 35 years; until one day when his young daughter, having watched her own grandfather die of lung cancer, begged him to quit. It was at that moment, Raef knew he needed to change his life. After trying many conventional quitting strategies unsuccessfully, he finally turned directly to God and took up distance running as ways to transform his life.

Six years later, not only is he cigarette free but he has completed 90 marathons as of September 30-2011 running at least one Marathon in all 50 states. Raef not only completes his 26.2 miles with a smile on his face but he also carries a gigantic American flag while he races! He is quickly closing in on his 100th marathon! No other Egyptian-American has accomplished this feat!

Anyone who knows Raef, knows that he is full of love and larger than life! He uses his story of triumph to inspire others to live their biggest dreams and to illuminate the Love that is the center of all life. Raef runs every race with a God is Love T-Shirt and a massive US flag with God Is Love inscribed into it. Raef founded God is love as a way to share the message that God is bigger than religion and culture, and to give back to the community while expressing his deep gratitude to God and to the United States.

In addition to all of his successes, Raef is service-oriented community member. He is a philanthropist who supports international children’s education and also serves meals at the local homeless shelter each week. He’s known around town affectionately as Offa.

Raef loves nothing more than to run with others who will spread the message that God Is Love. Please join us today!

Our club has grown to over 100 members, since we first began in April of 2005. Our members all enjoy being with one another and also participating in the posted marathons. We have each grown spiritually and physically. We love each other and are always trying to spread the word of God, through the simple quote “God Is Love”.
A donation of any amount will go towards:

How you can join to make a difference:
It is very easy to join our club! We are located in the South Bay area and are very eager in meeting new members. All you have to do is contact us by e-mail and you will hear from us! Do not miss out on such a wonderful and fun opportunity! Contact Us

All members receive a God is Love t-shirt (see: T-Shirts). You also benefit from being in a loving environment that will help you get healthy and accomplish your goals.

What does the word Coptic mean?

The word Copt is derived from the Greek word aigyptos, which means Egyptian. The modern use of the term Coptic describes Egyptian Christians.

Who founded the Coptic Orthodox Church?:

St. Mark founded the Coptic Church in Alexandria in about 55 AD. He was martyred in 68 AD

We believe in one God, God the Father, the Almighty, creator of the Heaven and earth, and of all things visible and invisible. We believe in one Lord, Jesus Christ, the only-begotten Son of God, begotten of the Father before all ages; Light of Light, true God of true God, begotten not created, of one essence with the Father, by Whom all things were made; Who for us, men, and our salvation, came down from heaven, and was incarnated of the Holy Spirit and of the Virgin Mary, and became man. And he was crucified under Pontius Pilate, suffered and was buried. And on the third day He arose from the dead, according to the Scriptures, and ascended into the heavens; and sat at the right hand of his Father, and also He is coming again in His glory to judge the living and the dead, whose kingdom has no end. Yes, we believe in the Holy Spirit, the Lord, the Life-giver, Who proceeds from the Father, Who, with the Father and the Son, is worshiped and glorified, Who spoke in the prophets. And in one holy, catholic and apostolic church. We confess one baptism for the remission of sins. We look for the resurrection of the dead, and the life of the coming age. Amen